Senator Ben Bruce has also taken to his Twitter page to react to the suspension of the Chief Justice, Justice Walter Onnoghen.

Ben Bruce thinks President Buhari needs to be stopped as soon as possible before he decides to remove another person, which is unknown to the people.

Ben Bruce blasted Oby Ezekwesili after she also reacted to the suspension which Ben Bruce said to be ”crocodile tears.” 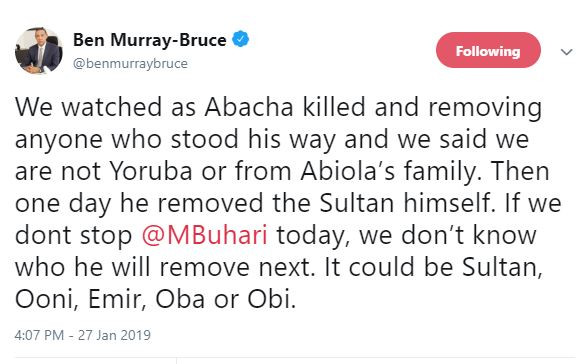 Atiku v Buhari: Read And Download The Full Report Of The Tribunal’s Ruling

Pardon Buhari, He Doesn’t Know Where He Kept His Certificate- Lai Mohammed

Police Sent To Barricade Lagos Venue Where Soyinka, Falana Were To Speak On Insecurity

Outrage As Nigerian Woman Was Videoed Flogging A Boy And Locking...

Secrets Revealed: Everything You Need To Know About Bobrisky

‘You All Owe Me Money, I Went To Prison Because Of...

Obasanjo Campaigns For Buhari In The United States