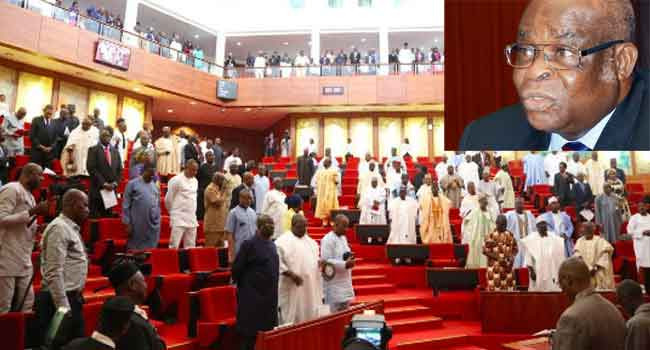 The Senate will be reconvening on Tuesday, January 29, to contemplate on the suspension of the CJN, Justice Walter Onnoghen.

The legislative arm on Thursday, January 24th, adjourned sitting until February 19th, which is after the  Presidential and National Assembly elections but have now decided to reconvene to contemplate on the suspension of the CJN. The National Assembly expected President Buhari to have sought their advice before taking any step on the issue.

The National Assembly leadership will also meet today, January 27th to discuss before they reconvene.

Atiku v Buhari: Read And Download The Full Report Of The Tribunal’s Ruling

Pardon Buhari, He Doesn’t Know Where He Kept His Certificate- Lai Mohammed

Police Sent To Barricade Lagos Venue Where Soyinka, Falana Were To Speak On Insecurity

Arsenal Star, Mesut Ozil Gets Rescued From The Hands Of Knife-Wielding...

President Buhari Refused To Show Up For #2019Presidential Debate

Insecurity: Wole Soyinka Calls For State Of Emergency In South-west

Meet The Billionaire Who Ordered A Helicopter To Fly Him Out...

Too Late: INEC Rejects Oby Ezekwesili’s Withdrawal From The Race

Davido Reacts To The Suspension Of CJN

Professor Oyelowo Oyewo And 13 Others Appointed As Commissioners In Oyo...

I Don’t Have Any Skeleton In My Cupboard- Saraki