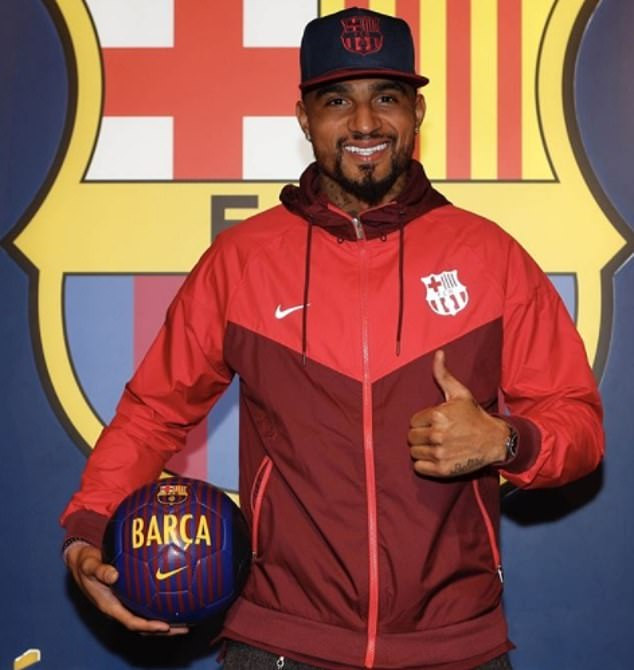 Giant of Spain, FC Barcelona have approved the signing of Kevin-Prince Boateng, a Ghanaian footballer from Sassuolo.

Barcelona signed the ex AC Millan, Tottenham and Portsmouth star to take the place of Munir El Haddadi, who has moved to Sevilla weeks ago.

Barcelona released a statement on Monday saying:  ‘Barcelona and Sassuolo have reached an agreement for the loan of Kevin Prince-Boateng for the remainder of the 2018-19 season. The deal includes the option to buy the player for 8m euros (£7.1m).’

In accordance with reports, Barcelona has paid 2 million euros for the loan and will show Boateng to the fans on Wednesday. Here is an overview of Boateng’s career

Cristiano Ronaldo Scores Four Goals For Portugal Against Lithuania And Becomes The Highest Ever Goal Scorer In Euro Qualifiers.

Cristiano Ronaldo Finally Reveals The Difference Between Him And Lionel Messi

Super Eagles Call Off Strike In Egypt Over Unpaid Allowances

Paul Pogba Hints At Leaving Man Utd, Says ‘Now Could Be A Good Time To Leave’

Rape Allegation: Neymar Arrives At Police Station In A Wheelchair For Questioning

Caught On Tape: How The DSS Arrested Sowore (Video)

Naira Marley Becomes The First African To Break A Record On...

Tonto Dikeh And Bobrisky Gift Fan 250k For Fighting For Them...

Outrage As Nigerian Woman Was Videoed Flogging A Boy And Locking...

Chioma Shares Cute Photos As She Returns To Social Media

Emiliano Sala: Recovered Body Yet To Be Identified By Investigators

Usain Bolt Drops Out of Football After Failed Deal

David Alaba Reveals Why He Was Stopped From Playing For Nigeria